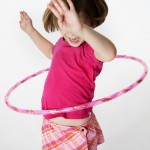 (Data from Centers for Disease Control and Preventions)

Health Effects of Childhood Obesity
Childhood obesity has both immediate and long-term effects on health and well-being.